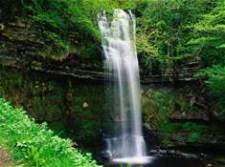 My family recently took a much needed vacation to the mountains in Georgia. We stayed in a Bavarian town called Helen and we had an awesome time. Our condo was on the Chattahoochee river and all the red buds and dogwoods were in bloom. It was a very peaceful and restful place to be.

One day we decided to go and visit one of the many waterfalls that are in the immediate area. We thought we might get to hit at least two waterfalls before the kids gave out, so we got in the car and headed for our first waterfall. When we stopped and got out of the car we were all filled with excitement. It had rained pretty hard a few days earlier and there was sure to be a lot of water coming over the falls. We went down the first set of steps and were a little apprehensive because it told us that the observation deck was .1 miles ahead and foot of the falls was 1.1 miles ahead. Now my wife and I could easily make this trip without too much effort, but we had a 4 year old and a 2 year old with us. I also have a bad back and my wife had thrown her back out earlier in the week, so carrying the kids would be a difficult endeavor, but decided to push on and try to make the 1.1 mile trek to falls.

The first leg of our journey was pretty easy. There were short areas of path and then wooden steps and decking to walk on. We thought, “hey, this ain’t so bad. We can make it.” Then we came to the end of the steps. We could hear water rushing and and we became more excited as we knew that the falls were just around the next bend. We were happily walking along and enjoying the beauty and majesty of God’s creation when we came around the next bend and realized that the waterfall was a lot farther away than we thought. We decided to press on, we had come this far why quit now. After another 15 minutes of walking, the trail turned back on itself and continued to descend to the foot of the falls. Unfortunately, our kids were done. They were crying and complaining that they couldn’t do it. We decided to turn back and make our way back to the car. Understand that the whole way was uphill and the kids were unable to walk uphill all the way. My wife and I ended up carrying them most of the way on our back or shoulders with many stops along the way.

That night I was getting ready to read to the kids and opened my pad to the place in the Bible that I had been earlier in the day. I was in Colossians in The Message. I don’t normally read the Bible in The Message, but I thought I would try it just once. Here is what I read to my kids,

We pray that you’ll have the strength to stick it out over the long haul—not the grim strength of gritting your teeth but the glory-strength God gives. It is strength that endures the unendurable and spills over into joy, thanking the Father who makes us strong enough to take part in everything bright and beautiful that he has for us. -Colossians 1:11-12

I went on to explain to my children that just like today when we had to carry them back to the car because they could not do it on their own, and we kept telling them to be brave and that they could make it, God will carry us through the things that we feel we cannot endure. I also said that God has some amazing things to show us in our lives if we just press on and find our strength in Him. I am not sure if they understood it all, but I think that God was telling me and my wife this more than our kids.

God has plans for us. He promised Jeremiah in 29:11 that , “For I know the plans I have for you, declares the LORD, plans for welfare and not for evil, to give you a future and a hope.” I believe that this holds true for us. God has plans that He will help us see through to the end. But we will not see those plans by our own “gritting your teeth” strength, but by the “glory-strength” that only comes from God.

Taken from http://lyricstranslate.com/en/integrity-hosanna-don039t-grow-weary-lyrics.html#ixzz312XoQsLp
Father God, I love you and praise you. You are my Abba Father. Help me lord to find my strength in the “glory-strength” and not in my own truly weak strength. May you get all the glory an honor that is due your name. Help me to persevere and not give up when it seems hopeless and yet the goal you have set before me is in sight. Lord, I trust your judgement and your plans for my life. Help me to walk in them not stumble. Amen.